A downloadable labyrinth for Windows

This is the second build in two years! Wow! Cool!

*Please install both fonts included in the aptly named "INSTALL THESE
FONTS B4 PLAYING" folder. Otherwise the game's text will not show up.
The final release will hopefully read the fonts locally from the game
folder instead.

*If you cannot get the game to run. Make sure:
-RGSS104E.dll is in the folder with the game
-If you are getting the dreaded "RGSS Player Is Not Responding" error
when starting the game up, try anything in this thread:
https://www.reddit.com/r/pokemonzetaomicron/comments/2fejtp/how_to_troubleshoot_...

*This build should be much truer to the final game, its about an hour playthrough of about a third of the first dungeon/area, a half hour if you're super rushing it and know exactly where to go.

*This demo build is an entirely different experience from the 2018 one, you'll have to start over from the beginning. This is also the final version of the demo build, the next release will be the full game soonest at the end of the year but probably sometime next. I have all the sprite/art asset work currently done and i gotta make sound effects and music and piece everything together next.

*The narrative pacing might be odd because i wanted to introduce a lot of the characters in the demo. These encounters will be more spread out in the final game.

*You get 4 avatar choices for each class instead of two now, the final game hopefully will have 4 palette swaps per avatar allowing you to create all sorts of characters.

*You can make an indefinite amount of characters at the moment, but
you'll probably crash the game at some point if you do?

*This is the final version of the demo

If you run into any other bugs please report them to me at dataerase1@gmail.com

The games super rad! The art and music really pulled me in and I HAD to play more when i saw the Cyborg Mutant class looking like a certain masked hero. Gameplay itself is real fun too.

One little thing, instead of asking the player if they want to save when they select the save option, i feel like itd be smoother to just go right to the save menu when you select the button like most other games. The player still has the option to back out from that screen if they dont wanna save.

You should put this on Steam Early Access, the art is very high quality and would probably help fund the full game.

extremely enamored with this game and its stylistic ambition, it's so successful and amazing

Good game, will shell big buckeroos out on release. hearts uw u

the sprites are really gorgeous and it has some neat music, but like the guy below me said, lolita knight is too op. maybe you should take a look at the knight class in etrian odyssey 4 (fortress), it would start with a similar skill that only increased the chances of it getting hit, so the risk would still be there. and as the game progressed, it would end up getting a skill that protected the entire team for 1 turn with a high mp cost.

another thing that annoyed me was that npc dialogue would trigger everytime i stepped on their respective tile. also, it would be a nice QOL improvement if you could see your party's stats and equipment in each shop.

really cool demo though, love the creativity put into it. looking forward to the finished game :)

This was pretty promising. I absolutely love the aesthetics and the world seems interesting too. But it was rather easy. Using a party of Lolita Knight, Cyborg Hero, Bullet Witch, and Technomancer, I never so much has had a single person KO'd. The Lolita Knight's guard skill is just way too powerful and can easily be used repeatedly after upping her MP a few times, and only an enemy in the last area ever did more than 0 damage to her with a spell. I might go through it again with a different party, but yeah. The other thing I take issue with is the speed in general; battle actions take quite a while to play out and menu and area transitions are quite slow all around. I'd like to see things sped up a bit in general, and the usual hold-down-a-key-to-speed-up-battles functionality.

Also, any time I loaded a save the UI would be missing until performing any area transition. So that's a bug. And my controls were different to what's listed here; for me I couldn't use Z at all, only C for confirm and A for the menu. Not sure if that's a change that was made at some point.

Hey, stumbled onto this and super interesting demo. Only put a little bit of time on it right now but for sure interested. The controller support was a nice surprise!

Question, sorry if it's a stupid one: Is there any way to adjust resolution? Playing the game in a small window like that is rough on the eyes.

Hi, loving the game so far, however I ran into a bug during my first encounter. I had chosen Technomancer using the original avatar, and during my first encounter I used the  program move "file extraction" and immediately after got a crash notification reading "Script 'Threat System' line 183: NoMethodError occured. undefined method 'threat' for nil:NilClass" I went ahead and tried it again and got the same result. I'm going to try playing another class now, just wanted to give you a heads up about the bug because this game seems really awesome so far!

Oh yeah, on my first run I didn't realize you could have multiple so I just had the one technomancer, everything is running smoothly now, thanks for the reply!

I'm really stoked to play this demo. However, I'm encountering a bug where the text boxes (character names + dialogue) are completely blank.

Hope to play it soon!

Having this same issue

there should be a folder titled "install these fonts"

install the fonts inside and the textboxes become readable

love it; also can't navigate to the OK on character name entry?

Press down not right

This is a very creative game!

But I must tell you; I got an error that crashed the game.

Something about not being able to find the quarantine icon graphic.

Keep up the good work!

Oh whoops! That was in previous builds but I think it accidentally got deleted. I can re add it easy

Great game! I love the graphics and music. Gameplay is also really solid and what you would expect from the genre.
is the ".prg" for the magic spells a commodore reference? XD

oh! You're the creator of Alisa! I've been meaning to play that aha.

It isn't a commodore reference per-say, just the general idea that programs/magic use .prg as a suffix in universe.

You make me feel famous now XD
Haha yea, I was kind of into c64 for a while. Just finished a small game for it. So that's why my mind was instantly thinking about that XD

This might sound weird, but have you considered making some classes/sprites unlockables? The character art seems to be the main draw of the game, so you could turn them into  rewards that you find in the dungeon, as a better incentive to keep playing. Sorry if this sounds dumb, just a thought that wouldn't leave me

liking it so far! only complaint is that it chugs a little if it renders too much on screen? the turning animation is a bit much when it lags

I've started the demo, and i really like what I'm seeing!

Looking forward to the full release!

This has so much charm! I love the sprites and aesthetic. The class choices are really original too. Bonus points for FM Synthesis. I hope you continue working on this!

I hope you continue updating this. It looks so good.

just found your work, this looks so good

The visuals on this are just dope.

Oh my god SO GOOD. Loving the art style and what animations there are and the character design.

I know it's in extremely super-early pre-pre-alpha development but having markers for the NPCs in B1 would be super-helpful in getting downstairs to heal before letting an ＵＮＤＥＦＩＮＥＤ completely demolish me.

Also, keyboard support for text entry would be cool - it's not readily apparent that ESC is the "delete character" key at first.

Super excited to see what comes up next! I am absolutely positively 800% down to see where this all goes I love this so much sadflksdljkaksldjkf

This is sick as hell!! The aesthetic and all the pixel art is so good!

Reminds me of the dungeon crawling in the original Phantasy Star games. 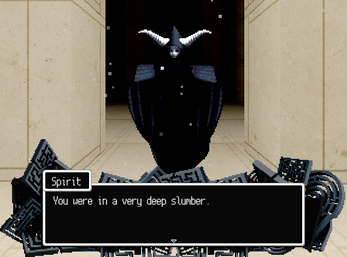 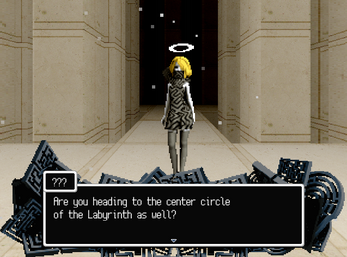 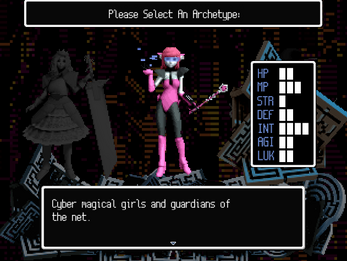 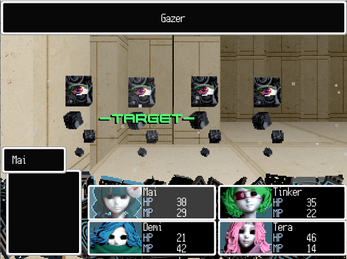 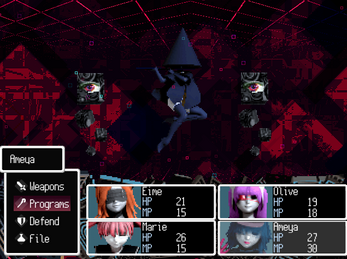